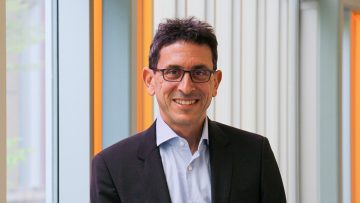 One-on-One is a series aimed at getting ‘behind the scenes’ with senior leadership in the Faculty of Medicine.

Dr. Steven Miller’s interest in science and humanism prompted him to study medicine. As a medical student, he travelled to Ghana for a research elective and was assigned to the pediatric ward of a large hospital. He vividly remembers watching children recover from being bedridden with malaria or meningitis to playing with a football in the yard mere weeks later. That experience led him to study pediatric neurology.

Following his residency in Montreal, Dr. Miller moved to San Francisco to complete a master of advanced science in clinical research and a postdoctoral fellowship in neonatal neurology and brain imaging at the University of California, San Francisco.

For the past decade, Dr. Miller served as head of neurology and head of The Garry Hurvitz Centre for Brain & Mental Health at SickKids and the University of Toronto. Since 2014 he was also an affiliate professor of pediatrics at UBC.

Now appointed head of the UBC faculty of medicine’s department of pediatrics, Dr. Miller plans to champion team collaborations with other departments in the Faculty, as well as inter-disciplinary partners across UBC and our community. [MORE]