The Tragic Side of Tide Pods 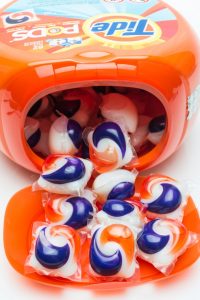 The colorful laundry packets have become one of P&G’s biggest blockbusters. There’s only one problem—too many kids are getting poisoned by them.

For an 8-year-old to be exuberantly goofing off, performing cartwheels and splits while grownups are talking, is nothing out of the ordinary. But as her mother, Katie Mancillas, is explaining, in Bella’s case, it’s almost miraculous.

Six years ago, when Bella was 2, she was rushed to the hospital because she was vomiting so uncontrollably that she inhaled fluid into her lungs, blocking her airways. Not long after she arrived, Bella stopped breathing and briefly flatlined. “Oh, my God, I think Bella’s gonna die,” Katie remembers telling her sister.

The cause of Bella’s near-death experience wasn’t a nasty stomach virus or a toxic pesticide. According to Katie, it was a squishy, multicolored packet that’s an increasingly common presence in American homes: a Tide Pod. Link to Link to Full Article

Dr. Mariana Brussoni  was interviewed last Fall about Tide Pods and the article was just published in Fortune Magazine.

In addition to her affiliations with the BCIRPU, University of British Columbia, and the BC Children’s Hospital Research Institute, Dr. Mariana Brussoni is also a board member of the Child & Nature Alliance of Canada. Trained as a developmental psychologist, she investigates child injury prevention. Current research interests include the influence of geographic, cultural and social places on parenting related to risk and safety; developmental importance of children’s risky play; the impact of injury on children’s health-related quality of life; injuries among Aboriginal populations; and injury surveillance.

Mariana’s research has been featured extensively in national and international media. She currently leads CIHR-funded research to develop an index of the playability of the built environment; and Lawson Foundation-funded research to develop an online tool to reframe parents’ risk perceptions with the goal of facilitating children’s access to nature-based risky play. Further details can be seen at http://brussonilab.ca/.